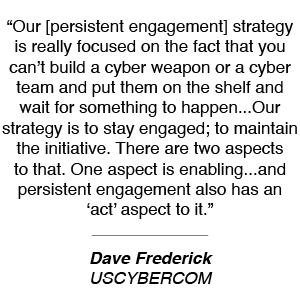 INSA Executive Vice President, John Doyon, sat down for a Wednesday Wisdom conversation with the Executive Director for the U.S. Cyber Command (USCYBERCOM), Dave Frederick, to discuss USCYBERCOM’s current priorities and challenges, its operations, as well as its role in the broader U.S. national security mission.

Mr. Frederick opened with a discussion of his role as Executive Director, noting that he is responsible for workforce strategy, advising mission strategy, and supporting the China strategy of USINDOPACOM, to name a few. He also discussed some of the Cyber Command’s current priorities, highlighting the organization’s work to continually advance defensive cyber operations and align CYBERCOM’s capabilities with the mission under the Joint Cyber Warfighting Architecture (JCWA).

On great power competition, Mr. Frederick emphasized the importance of persistent engagement in identifying and mitigating the threats from China and Russia, specifically. Recognizing that adversaries work to disrupt the U.S., he acknowledged the crucial need of staying engaged and maintaining the initiative in contending with great power threats.

Mr. Frederick also discussed the recent SolarWinds hack and CYBERCOM’s role in providing support to the National Security Council’s cyber crisis management mechanism. With regard to SolarWinds, he highlighted the importance of public-private partnerships, especially given the diverse nature of cyber threats. Mr. Frederick noted that by design, no government agency has full visibility on the cyber threats that affect our nation and thus it is important for both the public and private sectors to work hand-in-hand to identify and mitigate threats. While disagreeing with the claim that SolarWinds the “cyber Pearl Harbor,” Mr. Frederick recognized that the attack reveals the changing nature of the information environment, further reinforcing the critical nature of public-private partnerships.

Comparing cyber to a “team sport,” Mr. Frederick discussed the distinctions between NSA and CYBERCOM as they pursue separate, yet complementary, cybersecurity missions. While NSA has a strategically focused mission on protecting classified and national security systems, CYBERCOM is wholly focused on defending the DoD’s massive series of networks.

Mr. Frederick highlighted some of the joint work between CYBERCOM and various government agencies and departments on issues such as election integrity and interference. He shared that CYBERCOM was part of the whole of government effort to protect elections; although CYBERCOM focused on foreign threats, the organization worked closely with DHS and FBI to identify and defend against threats from adversaries such as Russia and Iran. He also discussed the evolution of threats to our elections and highlighted perception hacking as the most salient threat during the 2020 election.

Finally, Mr. Frederick closed by thanking the national security community for its continued work in defending U.S. national security. He remains optimistic about the future of cybersecurity and is confident the ingenuity of the American tech industry will raise the bar on defense down the road.